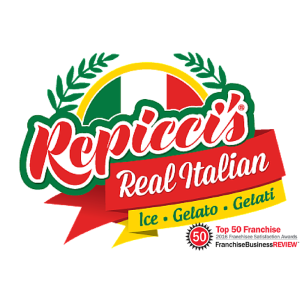 BIRMINGHAM, AL (January 18, 2016) —Repicci’s Real Italian Ice and Gelato is the recipient of Franchise Business Review’s Franchisee Satisfaction Award. They are listed among the “Top 200 Franchises” of 2016.

President and CEO of Repicci’s Real Italian Ice and Gelato, Frank Repici, said, “This has always been a family business, and I treat my franchisees as such. This top franchise award goes to show that if you maintain good relationships with your franchise owners, they will be happy and successful.”

Food services, of which Repicci’s is included, ranked in the top five most profitable franchise sectors in the 2016 report.

ABOUT REPICCI’S REAL ITALIAN ICE & GELATO
Repicci’s Real Italian Ice and Gelato is a food truck franchise with 45 owners committed to the same Italian artisan quality and great tasting products that its founder, Dominic Repicci, created more than a century ago. Its mission is to manufacture, distribute and sell the finest authentic Italian products with a continued commitment to its customers. To learn more about becoming a Repicci’s food truck owner, visit OwnARepiccis.com, or call 1-888-REAL ICE (732-5423).

ABOUT FBR50’S FRANCHISEE SATISFACTION AWARD
Franchise Business Review is the only ranking list that is based solely on franchisees’ satisfaction and performance. Information considered in ranking the top 200 franchises in the U.S. includes training and support, operations, franchisor/franchisee relations, and financial opportunity. Nearly 30,000 franchisees representing over 300 businesses and 20 sectors were polled. Learn more at http://franchisebusinessreview.com.